Foras na Gaeilge, the body responsible for the promotion of the Irish language throughout the whole island of Ireland, was founded on the second day of December 1999. 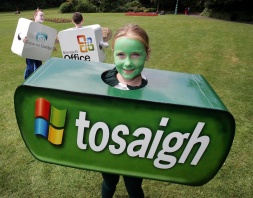 In the Good Friday Agreement, it was stated that a North/South Implementation body be set up to promote both the Irish language and the Ulster Scots language. Under the auspices of this body, Foras na Gaeilge will carry out all the designated responsibilities regarding the Irish language. This entails facilitating and encouraging the speaking and writing of Irish in the public and private arena in the Republic of Ireland, and in Northern Ireland where there is appropriate demand, in the context of part three of the European Charter for Regional and Minority Languages.

The staff of Bord na Gaeilge, An Gúm (Publishers), and An Coiste Téarmaíochta (Terminology Committee) and their activities have all been transferred to the new body.

Foras na Gaeilge has a role in advising administrations, North and South, as well as public bodies and other groups in the private and voluntary sectors in all matters relating to the Irish language. They will also be undertaking supportive projects and grant-aiding bodies and groups throughout the island of Ireland.

The functions of Foras na Gaeilge:

Remember, Foras na Gaeilge is here for you so if at any time you feel we may be of assistance, please do not hesitate to contact us. Our door is open to everyone.
About