The All-Ireland Marketing Awards, which are run by the Marketing Institute, are celebrating four years in existence this year. They are accepting entries at present and the deadline is Thursday 6 of February 2020.

At present we are seeking entries for the Marketing with Irish award, which is sponsored by Foras na Gaeilge, the all-Ireland organisation which supports and promotes our national language.

The Marketing with Irish Award

Differentiation is key in marketing, and using the Irish language as part of marketing is a powerful way of standing out from the crowd. Many Irish businesses seek ways to emphasise their origin and brand values. The judges are looking for examples of firms which have harnessed the marketing potential of the Irish language and bilingualism, and used this to support branding and positioning in the market. Entrants may be using Irish to attract new customers, increase customer loyalty, harness goodwill, gain a marketing edge over competitors, or enhance their public relations efforts.

More information is available at www.aimawards.ie or you can contact Aisling Ní Fhearraigh ag anifhearraigh@forasnagaeilge.ie.

More than €1m of grants approved by Foras na Gaeilge board

Grants were approved to promote Irish language literature and publishing through the Literature Projects Scheme 2020 (€99,721) and the Publishing Scheme (€655,819) which will support the plans of 12 Irish language publishing companies in 2020 including Cló Iar-Chonnacht, Éabhlóid and Futa Fata.

€120,000 was approved for the lead organisation Gael Linn to run the Gaelbhratach project in schools again in 2020. This is a scheme funded by Foras na Gaeilge and run by Gael Linn with support from Conradh na Gaeilge and Glór na nGael and encourages the use of Irish in English-medium secondary schools and primary schools throughout the island.

£6,470 worth of grants were approved for the Colmcille Scheme which fosters relations and strengthens the connection between the Scottish and Irish Gaelic language communities. Teanga an Cheoil Cheiltigh, which will be at Cultúrlann McAdam Ó Fiaich from the 12 until the 15 March 2020, is among the projects for which a grant was approved.

Welcoming the decisions of the board, Foras na Gaeilge chief executive, Seán Ó Coinn, said, “We have provided funding for some of the most important projects for the continuous development of the Irish language, and the results of the funding will go directly to the Irish language community, through our partners, the lead organisations and the publishing companies, to Irish language learners, to our writers, and of course, from them to the reading public.”

Friday’s meeting was the last meeting for five board members whose terms on the Foras na Gaeilge board will end. Foras na Gaeilge chairperson, Pól Ó Gallchóir, thanked Seán Micheál Ó Domhnaill, who has given more than eight years to the board, and Gráinne McElwain, Bláthnaid Ní Chofaigh, Seán Ó Coistealbha and Seán Ó hArgáin, whose terms as board members will be coming to an end on the 12 December.

Since the executive in the north is not functioning at present the North South Ministerial Council cannot meet and interim decisions in relation to the north south bodies cannot be made. Speaking after the meeting, Foras na Gaeilge chairperson said, “the work of the Foras na Gaeilge board will continue, although there will be a smaller board, until the two governments find a resolution to this question. We hope this will happen soon in 2020”.

The Gaeltacht Scholarships Scheme 2020-2022 is distributed under three categories:

Conradh na Gaeilge and Gael Linn, can be contacted directly for queries on the scholarships approved to the categories above.

An Gúm Christmas book launch. A rake of reading and loads of fun.

India, Ancient Rome, Narnia, Neverland and that stable in Bethlehem – what have these got in common, you might ask. Well, they all crop up in the fantastic collection of works from publisher, An Gúm, launched this evening. Well known broadcaster from TG4 and Raidió na Gaeltachta, Eibhlín Ní Chonghaile, did the honours for the launch which took place at the headoffice of Foras na Gaeilge on Amiens Street in Dublin. In her speech she mentioned the variety and breadth of the publications brought our during the year, works which include primary and post-primary texts, reading material for young people and a wide range of on line and print resources.

An Eala Órga is another wonderful product of the creative co-operation between author Gabriel Rosenstock and artist Brian Fitzgerald. A collection of quirky folktales from India the text and illustrations are both presented in an enchanting style. Publishing translations of famous works for young people is a longstanding tradition of An Gúm, one that is alive and well. This year saw a beautiful re-issue of Máiréad Ní Ghráda’s classic edition of Peter Pan, Tír na Deo, as well as a masterful translation by Antain Mac Lochlainn of the C.S. Lewis Narnia chronicle, The Horse and his Boy, An Capall agus a Ghiolla.

Is mise Manachán Maximus and Pádraigín Phléascach: Raic agus Ribíní will have young readers in the 10-13 age group (and their parents) laughing out loud at the humour, irreverence and madcap antics contained in these two illustrated titles.

Suaimhneas sa Stábla by Gabrielle Ní Mheachair is a completely different take on that familiar story told at this time of year.  Seán is a little mouse who just want’s to be able to get a good rest. He’s thwarted in this however, by the infernal racket going on in his stable. He’ll have to put manners on that crowd. That crowd however are somewhat special. Fergal O’Connor’s illustrations make this book a real gem.

As well as all that there are new resources for the Séideán Sí on line primary school project as well as new history and environmental resources for senior primary classes and Wood Technology and Constructions Studies material for second-level schools. A rich publishing harvest from the redoubtable staff at An Gúm.

It is twenty years today since the Language Body was established on the 2 December 1999. As well as the Language Body, which Foras na Gaeilge and the Ulster Scots Agency are part of, (through the North/South Ministerial Council (NSMC)), five other north / south bodies were established*, arising out of the implementation of the Good Friday Agreement. The implementation bodies will come together at an event organised by the NSMC in Armagh today to celebrate all that has been achieved by the north / south partnership since the Good Friday Agreement came into effect.

As part of Foras na Gaeilge’s twenty year celebration, key developments achieved in the Irish language sector in the last twenty years are being reflected upon, including the establishment of the six Irish language lead organisations which are a pillar of support for the community. In keeping with the transformation of how we communicate since Foras na Gaeilge was established in 1999, an active and lively campaign is running on contemporary and digital platforms ranging from podcasts to social media.  A practical resource providing information about the Irish language will be available through our redesigned bilingual portal site for the Irish language, www.gaeilge.ie.

Foras na Gaeilge chief executive, Seán Ó Coinn, said, “The landscape of the language in Ireland has totally changed in the last twenty years. This change can be seen especially in the north. Foras na Gaeilge has been central to this transformation. With Foras na Gaeilge we now have a systematic way. in the north and south, through funding schemes to support communities and groups seeking to develop the Irish language.”

Foras na Gaeilge chairperson, Pól Ó Gallchóir, said, “Foras na Gaeilge has succeeded in significantly increasing the support framework north and south – such as the permanent footing of Cultúrlann McAdam Ó Fiaich, Cultúrlann Uí Chanáin, Raidió na Life, Raidió Fáilte and the six Irish language lead organisations which are a pillar of support for the community. The online dictionary www.foclóir.ie is one of the most important learning resources we have for the language, and tearma.ie is one of the most significant developments in the preparation of Irish for full recognition as a working language of the EU in 2022.”

“The main role of Foras na Gaeilge in the twenty years since its foundation has been to develop a support system – a system which would ensure that permanent results would come out of the community’s energy, dedication and enterprise for the Irish language. Due to the arrangements of the Belfast Agreement, we can put a sound footing under our visions for the language. We are not lacking in challenges to the development of the Irish language throughout the island, but now we have infrastructure and systems to tackle them,” said Foras na Gaeilge chief executive, Seán Ó Coinn.

Watch the #Foras20 video on this link: https://www.youtube.com/watch?v=89kWSeV0CX8

*The five other north south bodies established arising out of the implementation of the Good Friday Agreement are Waterways Ireland, Safefood: Food Safety Promotion Board, Intertrade Ireland, the EU Special Programmes Body and the Foyle, Carlingford and Irish Lights Commission.

The 2019 published works of an Gúm will be presented by Eibhlín Ní Chonghaile in the offices of Foras na Gaeilge, 63–66 Amiens St, Dublin 1, on Thursday, the 5th of December at 6 p.m.

This will be an interesting event for anyone interested in Irish language books or who would like to choose a gift for an Irish speaker. All welcome to this social event. 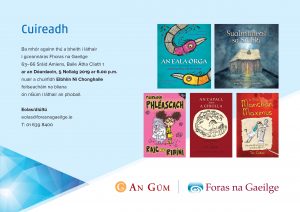 Comórtas Beo was held during Oireachtas na Samhna, in Citywest Hotel on the 31st of October, 2019.  TG4 recorded and broadcast the competition online and it can be watched here on the Youtube account of Foras na Gaeilge. A lot of work went into organising this competition and the result was a very high-standard event. We would like to thank Louise Ní Dháibhéid and the Oireachtas team for their expertise and support while we were working in conjunction with them to organise this event. We would also like to thank TG4, presenter of the competition Niamh Ní Chróinín, the judges who had a very difficult decision to make: Sinéad Ní Uallacháin, Cian Mac Cárthaigh and Richie Ó hEaghra, Development Manager of Coláiste na bhFiann Barra Mac Thiarnáin, as well as the Coláiste na bhFiann team overall, Chief Secretary of Conradh na Gaeilge, Julian de Spáinn, and the Foras na Gaeilge team for the work they put into organising this competition.

National Strategy for the Irish-language Arts

Foras na Gaeilge welcomes the development of a National Strategy for the Irish-language arts by the Department of Culture, Heritage and the Gaeltacht. If you are a practitioner, an audience member, or interested in the Irish-language based arts, this is the time to add your voice to this Strategy. The consultation process is now underway and the research team welcomes suggestions, ideas and submissions at ealaionateangabhunaithe.ie. Submissions and suggestions will be accepted up until 31 December 2019.