Foras na Gaeilge is delighted to announce that over two million users consulted the New English-Irish Dictionary website, foclóir.ie, in the twelve-month period from 1 April 2018 to 31 March 2019. This is the first time since the site was launched in January 2013 that the two million mark was reached in any twelve-month period. During the same period, over 25 million pages were viewed.

The foclóir.ie website was launched in January 2013. Entries were added to the website every six months until January 2017. There are almost 48,000 entries and 130,000 sense units on the website. The dictionary team is currently working on the print edition of the dictionary which is due to be published next year.

What are Branar and Moonfish?

Branar Téatar do Pháistí is one of the leading theatre companies creating work for children in Ireland. Branar creates beautiful, innovative, high quality productions that inspire children and their families and supports artists to create work for young audiences through our tailored programmes of resource sharing and Tiny Show creation. They also create opportunities for children to explore their own arts practice in school settings.

Moonfish is a Galway-based theatre company creating productions in Irish and English that is rooted in the broad world of the imagination. Moonfish is a collaborative ensemble that blends language, story-telling, music and dance with puppetry, interactive technology and lighting to create exhilarating experiences that challenge and excite their audiences.

Foras na Gaeilge believes that the arts have a vital role to play in society by helping us to define our identity and express ourselves.

How did Foras na Gaeilge support Branar and Moonfish?

In 2018 Foras na Gaeilge supported Branar and Moonfish through the Drama Companies Scheme 2018.

Further information on how Foras na Gaeilge supports the arts is available in the booklet Time for Arts.

Who are the Carntogher community?

There is a small rural community of 200 families in the Slaughtneil area, under Carntogher Mountain, on the edge of Maghera, Co. Derry. The area was experiencing depopulation over the years, a challenge which impacted on language, traditional ecological habitats and the agricultural sector.

The Carntogher Community Association was established in 1992 to regenerate the Slaughtneil and Carntogher area and to promote environmental, economic, social and cultural projects in the area.

The revival of the Irish language is central to the ethos of the development committee and they promote all projects bilingually. There is a young, lively, energetic community of Irish speakers a bright vision for the area who are currently leading the revival of Irish.

Carntogher was among the 5 Irish speaking communities that gained official recognition as an Irish language network in 2015. This was the first time such official status was awarded to an area outside the Gaeltacht.

Heart of the Community

Services through Irish for the Carntogher community include a shop, a coffee shop, resource centre, theatre, youth club and afterschool club. There are Irish language and music classes, conversation circles, training courses and reflexology sessions for babies and children in the resource centre provided locally.

Féile Charn Tóchair is a community based festival which celebrates culture, language, environment and the archeological heritage of the Maghera area. As well as Féile Charn Tóchair the community organises Feis Charn Tóchair, which promotes culture and revival of the Irish language. There are sections in the feis which are suitable for all young people, whether naíscoil, Gaelscoil, or English medium primary and secondary schools.

If you are interested in getting more information about our funding schemes and about the support available for you fill in the contact box below and we will be in contact with you.

There is further information on the support Foras na Gaeilge provides to the community in this booklet.

More information on Irish language networks is available at #GaeilgeleChéile.

Who are Na Gaeil Óga?

Na Gaeil Óga were established in 201o to give opportunities to young Irish speakers to use Irish and play Gaelic games. Na Gaeil Óga have six teams for adult members for hurling, football and camogie. There are 230 underage children registered with them now and 205 adults playing, which means that there are 435 in total playing at present. As well as that there are at least 200 other people involved indirectly, especially parents of the children, which means that there are around 635 people taking part in some way each week.

Na Gaeil Óga have created a really strong community in Lucan, Dublin, since they were established in 2010. As well as activities on the playing field they are organising weekly Irish classes for parents as well as social events of all kinds.

The Irish-medium club places a continuous emphasis on the participation of women and girls in sport and therefore they started new under-age teams for girls. All activities are of course organised through the medium of Irish and there are scores of people gathered at Na Gaeil Óga.

Foras na Gaeilge provided support for Na Gaeil Óga in 2018 through the Summer Camps Scheme and through sponsorship. If you are interested in getting more information about our funding schemes and about the support available for you fill in the contact box below and we will be in contact with you.

There is further information on the support Foras na Gaeilge provides to the community in these booklets: 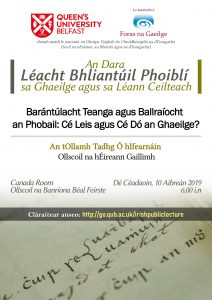 At the second meeting of 2019 on Friday 8 March in Belfast,  the Foras na Gaeilge board approved grants for Scottish and Irish Gaelic joint projects and for drama companies throughout the island.

€32,522 worth of grants were approved under the Colmcille Grants Scheme, a scheme which fosters relations and strengthens the connection between the Scottish and Irish Gaelic language communities. The projects to be run during 2019 include Nasc with Sgoil an Taobh Siar, Isle of Lewis, which is being run by An Clár as Gaeilge (€12,000), Scottish Gaelic Programme for the Willie Clancy Summer Scheme 2019 (€4,500) and Òran Bagraidh with Cumann Cultúrtha Mhic Reachtain (£3,500).

As well as the above grants the Scholarships Scheme 2019 will be distributed under three categories:

Conradh na Gaeilge, Gael Linn and Cumann an Phiarsaigh can be contacted directly for queries on scholarships.

Note to the editor:

All information on the funding schemes below now open is available at www.forasnagaeilge.ie/sceimeanna 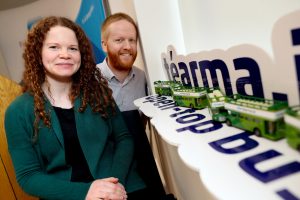 A new version of www.téarma.ie, The National Terminology Database for Irish, was launched during Seachtain na Gaeilge at a launch event at Foras na Gaeilge headquarters today. The new website was developed by Fiontar & Scoil na Gaeilge, DCU with funding from Foras na Gaeilge.

www.téarma.ie is a platform for publishing the work of the Terminology Committee, a collection of terminology that covers a broad range of technical fields, from contemporary computing to traditional sailing. The database contains approximately 185,000 bilingual entries and has been one of the most widely-used Irish-language digital resources since its launch in 2006. Users of the site made over 7.5 million searches in the database in 2018.

The appearance of the website has been totally redesigned in a clean, contemporary style that is in keeping with other Foras na Gaeilge language resources. The new site has a responsive design, meaning that it will render well on a variety of devices or screen sizes.

Terms listed in the search results now have an additional feature which provides one-click access to searches in several other Irish-language resources (i.e. www.foclóir.ie, www.teanglann.ie, www.gaois.ie and Nua-Chorpas na hÉireann).

Foras na Gaeilge CEO, Seán Ó Coinn said, “For over 10 years, since the terminology website was made available to the public for the first time, Irish terminology and lexicography have dramatically changed in ways you would not expect in that short period of time. That transformation not only shows the linguistic expertise we have among us, but also reveals the technological expertise and partnership. Foras na Gaeilge has a very beneficial collaboration with third level institutions in relation to lexicography and terminology initiatives which allow us to make achievements that would not be possible for us to make alone.  I would like to thank Fiontar & Scoil na Gaeilge DCU in particular in relation to this project. I would also like to thank members of The Terminology Committee for being so generous with their time and expertise; the result of their work can be seen on this new site.”

The following developments made on www.téarma.ie:

The new version of www.téarma.ie uses an onomasiological (or concept-based) approach with the search term being listed separately under each of the different concepts to which it refers. The previous version followed a semasiological (or dictionary-based) approach wherein the different meanings of a term were laid out under a headword. The main reason for this shift in emphasis is to differentiate more effectively between www.téarma.ie as a source for technical terms and online dictionaries which focus on general language.

In addition to the new features mentioned above, the terminology management system behind www.téarma.ie has been totally re-engineered. This is an essential aspect of the project that is not visible to the public but enables the effective storage and editing of the terminological data. 'Fiontar & Scoil na Gaeilge, DCU will launch Terminologue, a public, cloud-based version of this platform at www.terminologue.org in April 2019. This new resource will allow users to create, edit and publish their own termbases free of charge. In addition, the source code for both www.téarma.ie agus Terminologue will soon be published at github.com/gaois.